These data demonstrate that adding DARA to RVd significantly improves response rates and depth of response, including sCR and MRD negativity. As seen in other randomized studies, continued use of daratumumab improved depth of response. The overall safety profile of D-RVd is consistent with previous reports with DARA plus SoC. Likewise, similar to what was reported from CASSIOPEIA, stem cell mobilization and ASCT are feasible with D-RVd, without a significant effect on hematopoietic reconstitution. The study is ongoing, with pts continuing maintenance therapy. 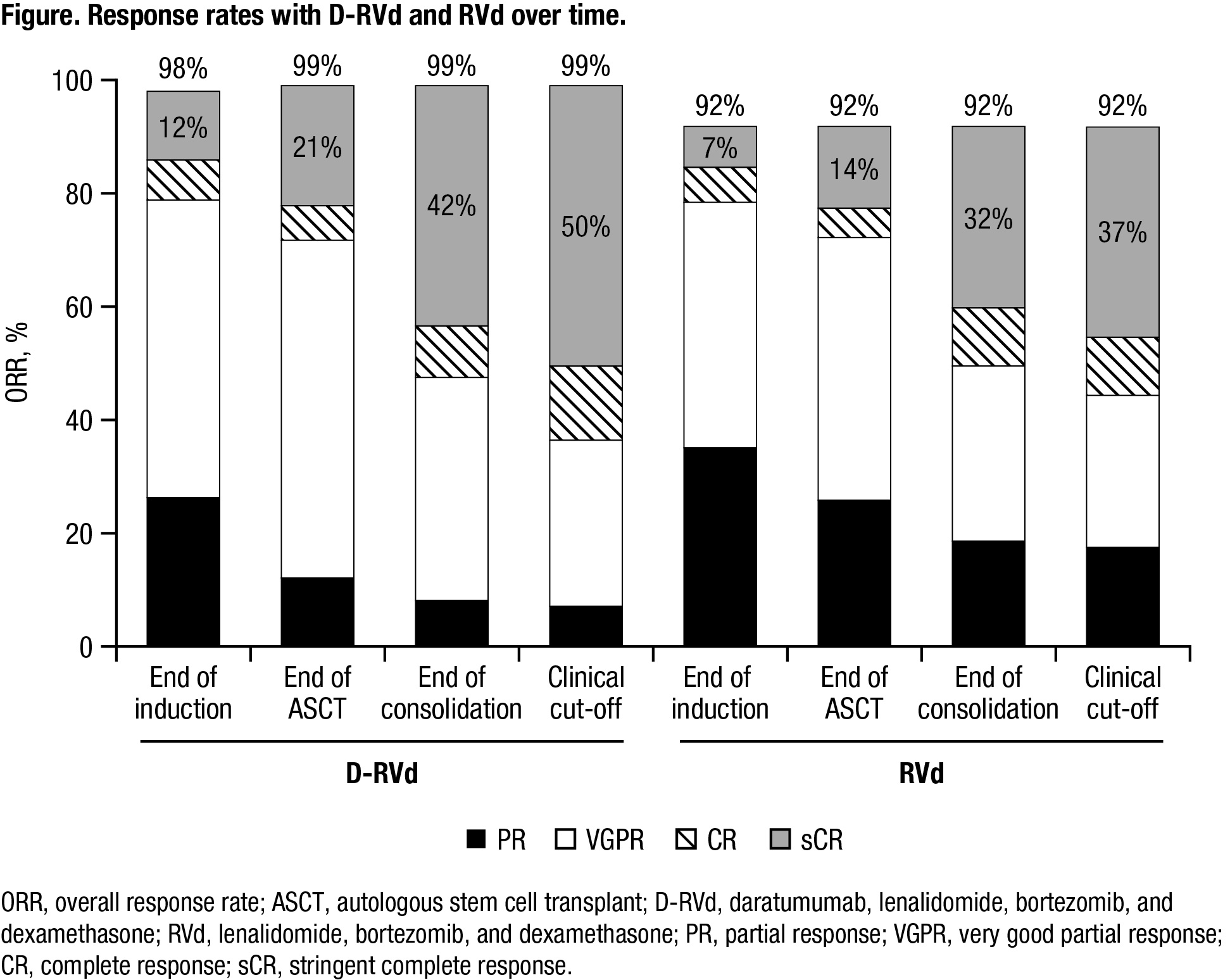 Conclusion cited from the abstract: In CASSIOPET, the PET/CT companion study of the CASSIOPEIA trial, we show that baseline PET-CT findings have prognostic value. More D-VTd pts reach double negativity of PET/CT and MRD post-consolidation vs VTd. With more mature data, PET-CR/MRD negativity concordance may provide insight into utilizing both methods as a predictive surrogate for pt outcomes. 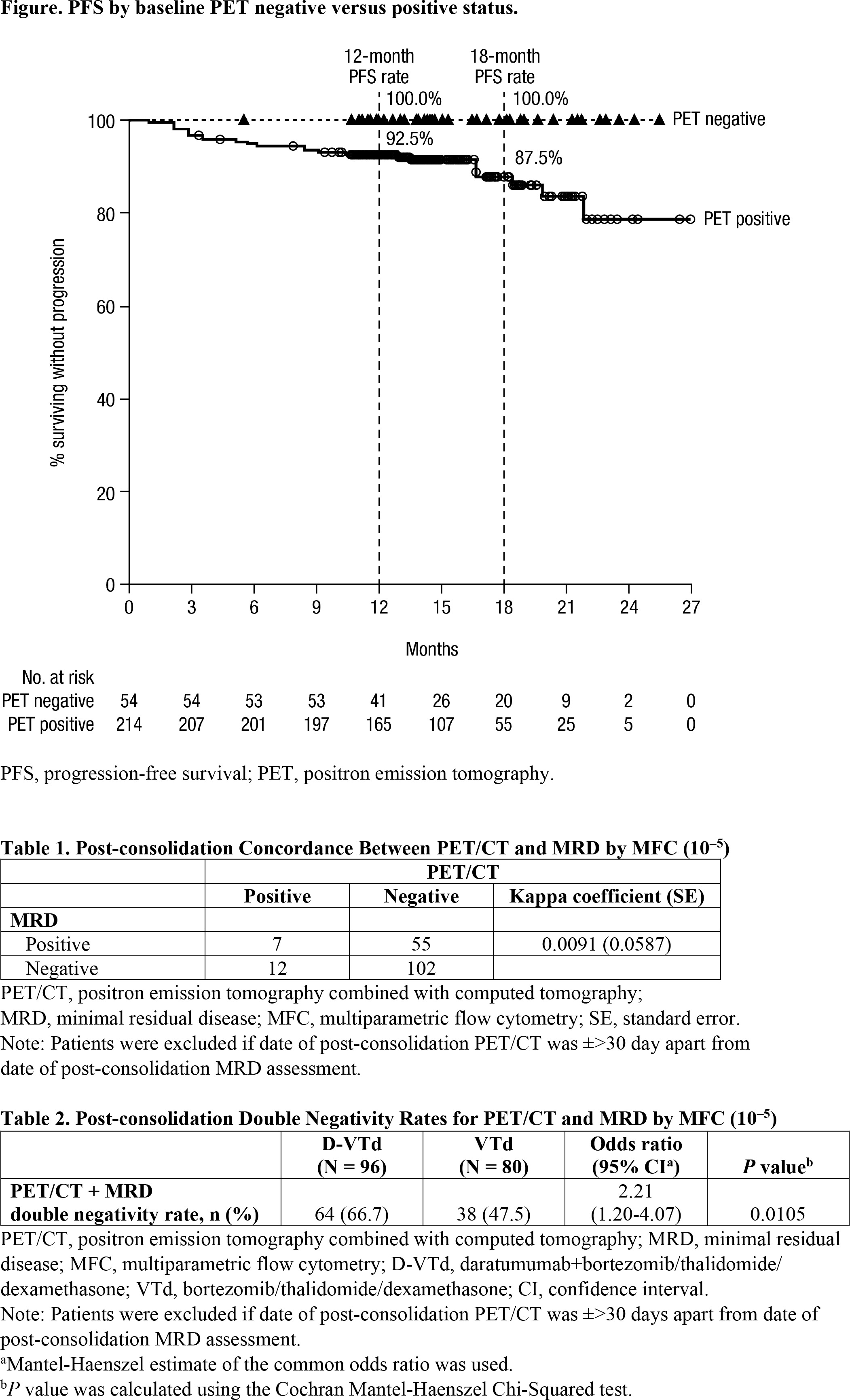 693
Treatment of Primary Plasma Cell Leukemia with Carfilzomib and Lenalidomide-Based Therapy: Results of the First Interim Analysis of the Phase 2 EMN12/HOVON129 Study

KRd induced deep hematologic responses after 4 cycles of therapy (≥VGPR in 80% and ≥CR in 33%) without early death. Toxicity consisted of 20% grade 3 and 27% grade 4 events, occurred mainly during the first cycle of induction, and was manageable with appropriate interventions. In conclusion, KRd provides efficient and rapid disease control, which is essential to prevent early mortality because of irreversible disease complications and to improve survival of patients with this aggressive plasma cell proliferative disorder.

Conclusion cited from the abstract: The addition of C to Rd in transplant ineligible newly diagnosed MM pts significantly increases the rate and depth of responses but it is not associated with an improved PFS and OS due to a higher proportion of deaths in the C-Rd arm, mostly infectious, in pts > 75 years and being early deaths. Overexposure to steroids due to the delayed clearance induced by C in this elderly population could explain our results.

Conclusion cited from the abstract: Ixa-Dara-dex is an effective therapeutic regimen in unfit patients with limited toxicity, not giving rise to (early) mortality. Additionally, in the majority of frail patients this regimen is active and feasible. However, better identification and support of those patients is warranted, as we observed early mortality due to vulnerability and infections. 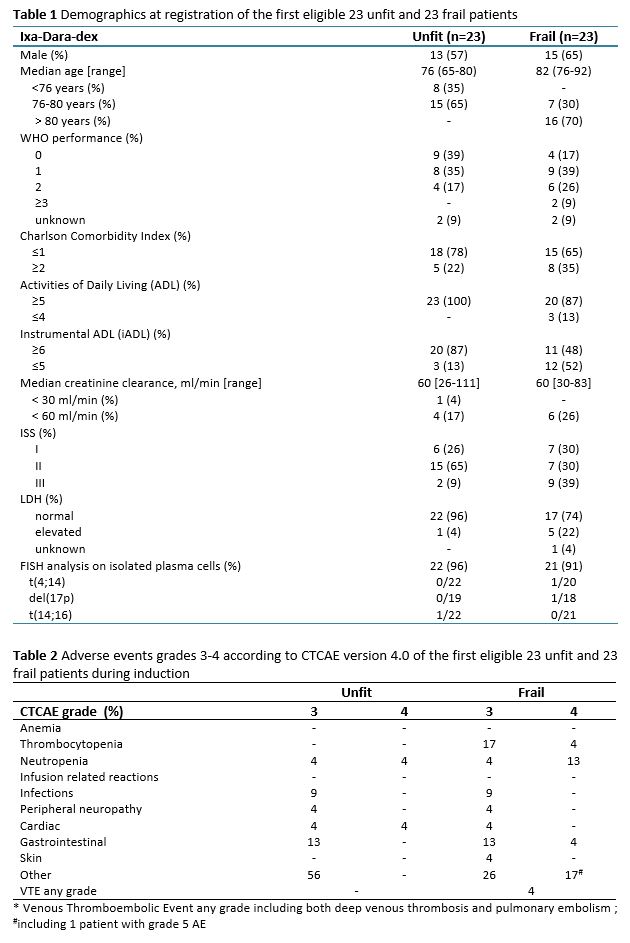 Conclusion cited from the abstract: Once weekly carfilzomib 56mg/m² in combination with either lenalidomide or thalidomide resulted in high response rate and deep responses including MRDneg status in 47.1% of tested elderly patients with NDMM. Results were similar in very elderly pts (³75 years) and in those aged <75 years. Treatment was associated with an acceptable tolerance profile. Adverse events (mostly infections, and less frequently GI-toxicities, cardiac failure, and renal impairment) resulting in treatment discontinuations occurred mostly during cycle 1 or 2, when the twice weekly regimen was administered as run in phase.